Notary services are available at City Hall, free of charge to the public, during regular business hours.

Sign up for project updates by email here:
bit.ly/lewisandclarkbridgeupdates

In recent months, the Rainier City Council has passed two ordinances in response to citizen complaints about ongoing code violations within city limits. Both are now officially in effect.

Ordinance 1086 was passed unanimously by council at its May 2 meeting. It adopts the codification of the city's municipal code enforcement procedures and was based on a similar ordinance used by the City of St. Helens.

The ordinance establishes procedures for the issuance of warnings, citations and the filing of liens against the properties of persons found to be in violation. It establishes penalties of between $150 and $500, with every day of a violation considered a separate offense. The minimum penalty or fine for a third or any subsequent violation is $1,000.

At its June 6 meeting, council voted unanimously to adopt Ordinance 1087. Passage of that ordinance had been recommended by the Planning Commission at its March 23 meeting.

Ordinance 1087 was based on ordinances from multiple other jurisdictions, including Longview, Washington and Aurora and St. Helens, Oregon. It seeks to limit the use of RVs and other nonpermanent structures for permanent human habitation, as such use is detrimental to the health, safety and welfare of the persons residing in them and the public at large. Ordinance 1087 also regulates on-street parking of RVs within city limits.

However, it still allows for the safe, comfortable and sanitary use of RVs for short-term and temporary habitation.

Under Ordinance 1087, RVs are not allowed to be parked on city streets for more than 30 minutes between the hours of midnight and 6 a.m. They may be parked in front of the property longer than that if they're owned by the resident or a guest, but not for longer than 14 days per calendar year. The RVs also must not interfere with traffic or create a hazard by obstructing drivers' views. Porches and awnings and related structural projections may not be constructed adjacent to or attached to an RV.

RVs are required to be mobile and operable on inflated wheels and licensed with the Department of Motor Vehicles. They are not allowed to be lived in unless specifically approved by the city. But a private residentially zoned property is permitted to use an RV to house guests no more than 14 days in a calendar year. RVs may also be brought to a lot by a guest for no more than 14 days per calendar year.

Temporary siting and occupancy of an RV may be allowed at the discretion of city staff and must comply with code, with lawful connection to city water and sewer approved by the public works director. A denial may be appealed to council.

The minimum penalty for violation of Ordinance 1087 is $250 per violation, with each day of offense counting as a separate violation. A third or subsequent violation is a minimum of a $1,000 fine.

This area shares an amazing variety of history; including the 'Lewis & Clark Trail' and a view of our namesake Mount Rainier and the impressive view of the northwest volcano, Mt. St Helens. 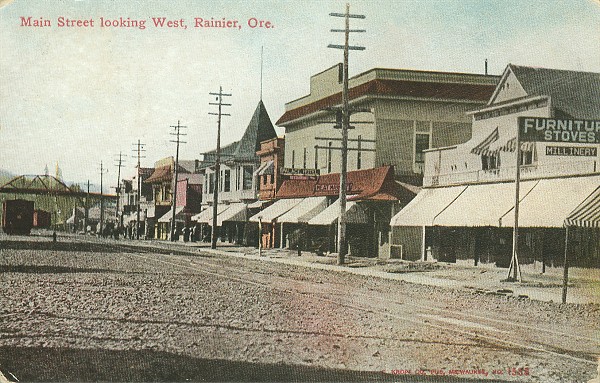 The Columbia County frontage of the Columbia River offers some of the best Sturgeon Fishing year around, and is also perfect for camping and water recreations.